Celebrating Immigrants And Their Contributions
through stories, talks, and workshops 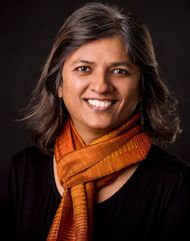 ​
Dr. Nalini Krishnankutty is a first-generation immigrant American, an engineer turned writer, educator and speaker, who focuses on shaping narratives about immigrants. She believes deeply in the dignity and equality of all human beings, and in the power of migration to open minds and create new possibilities for both immigrants, their new homeland, and the world.

Nalini is actively countering current anti-immigrant sentiments in the country by highlighting the complex history of US immigration and the experiences and contribution of immigrants in workshops, classes and talks at conferences, community workplace programs, and in schools and libraries.  on how immigrants shaped and continue to shape the USA.  The 16-minute video of her 2018 TEDxPSU talk on “How Immigrants Shape(d) the United States” is being used in public school and university classrooms, and for training sessions across the country. While working to build community platforms to spread awareness about our immigrant legacy, and to make the contributions of immigrants visible, Nalini also shines a light on the many processes that created countries like the the United States - colonization, conquest, annexation, slavery, and indentured servitude, in addition to immigration.

Nalini wrote for over a decade about diversity and the common threads that connect us, including in the Centre Daily Times and the Christian Science Monitor. She is an alum of the Voices of our Nation’s Arts (VONA/Voices) Fiction Workshop, the premier workshop for writers-of-color, and of the Op/Ed Project which supports diverse voices in editorial pages. She is currently writing children’s books focused on the immigrant experience.
​
Nalini was born in Kerala, India and grew up in Mumbai. A National Talent Search Scholar, she got her BS degree in Chemical Engineering as one of three girls in a class of 60 students, from the Bombay University Department of Chemical Technology (UDCT, now ICT). She came to Penn State as a graduate student and received her MS and PhD degrees in Chemical Engineering, and took and later taught classes in Women’s Studies.

Nalini is the Diversity, Inclusion and Belonging Program Manager at Penn State Human Resources and has extensive local and statewide experience in advocating for and helping create inclusive communities. She is actively involved in the community and has served for many years on her precinct election board, on State College Area School District Inclusion Excellence committee, taught classes at Penn State’s Osher Lifelong Learning Institute (OLLI), and volunteered at the Central Pennsylvania Festival of the Arts and at Asian Indian cultural celebrations and fund-raising events. She is a founding member of the PanAPIDA Circle, a local group formed in 2021 to stand up to anti-Asian hate, and a Board member at the Mid-State Literacy Council, She has served as elected Chair of State College Borough’s inaugural Community Oversight Board, and on Governor Wolf's Advisory Commission on Asian Pacific American Affairs. currently serves as a Council Member on State College Borough Council.